Sickle cell disease and thalassemia are both genetic disorders that resulted from genetical errors for hemoglobin-a substance that is made up of protein and iron molecule responsible for carrying oxygen in the red blood cells. These orders can lead to fatigue, jaundice and episodes of pain ranging from mild to very severe. Sickle cell and thalassemia can be inherited especially from parents who pass an abnormal gene. When this occurs, both diseases can be severe or fatal.

Sickle Cell Disease was discovered in the 1900s, formerly known as "peculiar, enlongated sickle-shaped erythrocytes (red blood cells)". Advancement in studies indicated that the pain sickle-cell patient go through is caused from a blockage of tiny blood vessels. Furthermore, several studies concluded that sickle cell disease is caused by an abnormality in the hemoglobin, referred to as "hemoglobin S". This is disease among other identified diseases was the first to be understood by scientists at the biochemical level due to the fact that researchers learned that the abnormal hemoglobin is actually changing form (called sickling) because of a single amino acid error in the hemoglobin S.

The underlying molecular cause of the disease has been understoond for over a century. Yet, progress in translating the knowledge to improvde patient care is slow; that is, reflects the challenges of treating the disease. In United States, health research and treated were neglected among the underserved population where they are more prone in developing the disease. In the early 1970s, just after the civil rights movements that it was recognized the fact that patients with sickle cell disease were an example of racial inequality in the healthcare. In addition to this, the Sickle Cell Disease Association of America was founded and eventually helped to establish the Sickle Cell Amemia Control Act of 1972. The government provided grants for screening research and treatment programs.

New treatment for the sickle cell disease were discovered as scientific progress and technology evolved. The Prophylactic Penicilin Study (PROPS) shows that administering penicilin (an antibiotic) to unsick patients could prevent death caused by serious infections in sickle cell disease. Also, the Multicenter Bone Marrow Transplant Study illustrated that 84% of children who were diganosed with the disease could be cured after receiving  a bone marrow transplant from a matched donor or family member. Mid 1990s, the U.S Food and Drug Administration authorized a new therap called Hydroxyurea as a form of treatment to reduce further complications of the disease. "Hydroxyurea works in part by stimulating the body to resume production of fetal hemoglobin (hemoglobin F), a normal hemoglobin in the fetus that prevents sickling".

This is an inherite blood disorder characterized by low hemoglobin and fewer red blood cells in the body compared to normal. In 1925, Thalassemia or Mediterranean Anemia was first described by a Detroit physician who studied Italian children with severe anemia (low levels of red blood cells), poor growth, huge abdominal organs and early childhood death. In 1946, the cause of thalassemia was discovered to be an abnormal structure in the hemoglobin. The body destroys the red blood cells, resulting to Anemia. The body tries to make red blood cells quicker than normal as a means of compensating for the loss; however, this can lead to other thalassemia complications such as bone abnormalities and spleen enlargement. 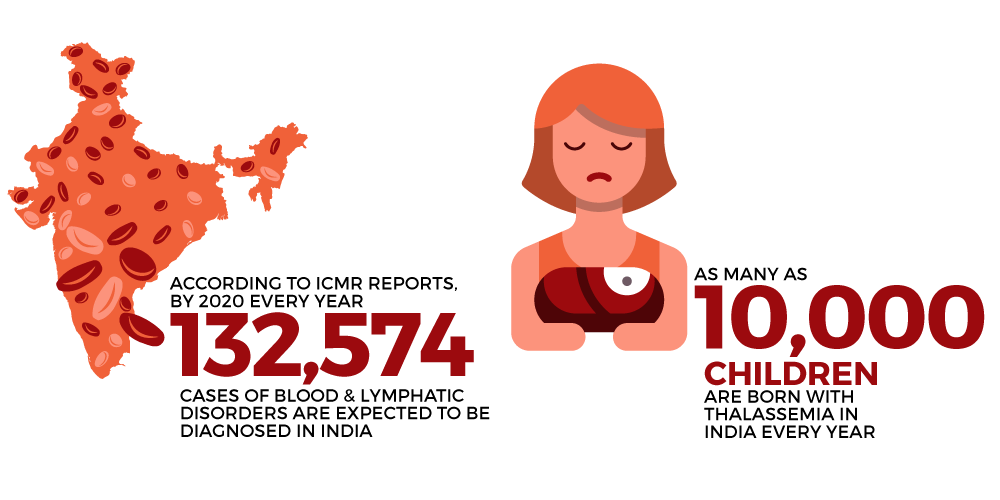 In the year if 1960, doctors started transfusing fresh red blood cells to patients with thalassemia every month to treat the disease. This mitigated most of the symptoms in childhood and had a huge impact in the survival rate of thalassemia patients; this treatment is currently in practiced. Nonetheless, since blood contains a large amount of iron, most patients died during their teenage years from the damaged caused by too much iron. Moreover, researched discovered that surplus iron amount can be removed from the body through by a drug called desferoxamine. The drug has prevented iron-induced heart disease and has improved the life expectancy of patients. Recently, there is availability of two oral drugs that aid in removing iron, which has improved the quality of life of the patient with excess iron from blood transfusion for thalassemia. On the other hand, specialized imaging test can detect iron in the heart and also permit patient to be treated to prevent iron-related heart failure.

Violation Of Human Rights in Nigeria: What Is Going On Now!

In Nigeria, human rights are being violated by the justice system such as the police. These days, the police have broken the code of conduct of human rights that includes unlawful killings, torture and other ill-treatment as well as enforced disappearances. The conflict in Niger Delta poses as a threat to the safety and lives of the Nigerian residents. Human right advocates and journalists are intimidated and harassed for expressing their voice. Women still face the violence, which is widespread across the country, and unfortunately the government has shown no interest so whatever to protect the rights of the children. Furthermore, millions of citizens face eviction in the country.

Although the government has given its pledges to foresee the challenges in the criminal justice system of Nigeria, there is little or no progress to address the issue. The Nigerian Police Force (NPF) has no regard for human rights; people are subjected to illegal killings by the police either during or before arrest, or along the streets. A majority of the armed forces that perform such crimes are left unjustified by the legal system of Nigeria (the court).