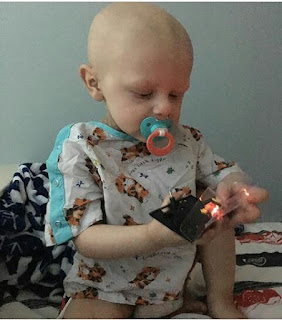 Chris Jr Strong,  an infant  who was diagnosed with stage  4 neuroblastoma.


Neuroblastoma is cancer that begins in the early stage of nerve cells (also known as neuroblasts) of the sympathetic nervous system, therefore, they are found anywhere along this system.  1 out 3 neuroblastomas start in the adrenal glands. About 1 out of 4 begin in sympathetic nerve ganglia in the abdomen while the rest start in sympathetic ganglia near the spine in the chest or neck or in the pelvis .

Neuroblastoma often begins in infancy and are diagnosed within the first month of life. It is found when the tumor begins to grow and cause signs of symptoms. Sometimes it forms before birth and is found during a fetal ultrasound.
By the time is diagnosed the cancer cells must have matured (spread). and this most often spreads usually to the lymph nodes, bones, bone marrow, and liver among infants. It also spreads to the skin
Lump in the abdomen, neck, or chest.
Bulging eyes.
Dark circles around the eyes ("black eyes").
Bone pain.
Swollen stomach and trouble breathing (in infants).
Painless, bluish lumps under the skin (in infants).
Weakness or paralysis (loss of ability to move a body part).

This is a common extracranial solid tumor among children under the age of five years. It affects 1 in 7000 children. 40% of cases were diagnosed in children younger than 1 year of age. These infants have extremely favorable prognosis even in the presence of metastatic disease. The observation has contributed to screening infants with the aid of a specific catecholamine markers that are easily measured in the urine in order to identify the disease in preclinical stage, although it is unknown whether this approach can reduce mortality rate of neuroblastoma