It is feared that the worst yellow fever outbreak in decades which lead to 250 deaths in Angola, and is straining global vaccine supplies, posing a dilemma for health officials, could spread in Africa and possibly into Asia.  According recent reports, the immediate concern is that the virus may extend to larger parts of African urban centers, as happened in previous outbreak which caused catastrophe in Nigeria in the beginning of the year 1986, and ultimately infected 116, 000 people and killed 24, 000 individuals (Chukwuma Muanya, 2016).

There has been an increase in the number of countries reporting yellow fever to WHO over the last 10 years, especially in West Africa. 93% of the countries notified cases in the past 4 years, a 30% increase compared to the period 1995-1999. This increases the circulation of the virus in non-immune human population (United Nations, Population Division, 2001).


Historically, when there was limited supply of vaccines for yellow fever, small outbreaks of yellow fever that occurred in a non-immune population in densely populated cities were often forerunners of large urban epidemics. Today, there are 12 countries with large non-immune populations which are at risk. For example: the last yellow fever outbreak in Nigeria occurred 14 years ago, but it took 10 years to control the transmission of the virus among the population. Given the low vaccine courage to children under the age of 14, the number of children at risk in Nigeria has been estimated at 23 million in the urban area. Immunizing the urban populations in these high-risk countries would require vaccinating approximately 100 million people (United Nations, World Urbanization prospects 1999). 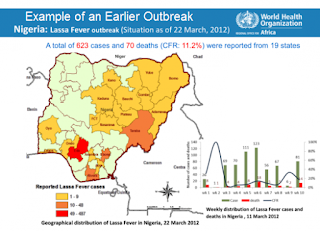 Coordinator of the World Health Organization (Control of Epidemic Diseases Unit) in Geneva, Switzerland, William Perea, in the nature report noted: "For now, the area for the most immediate concern is Africa - where some countries such as Nigeria, have less than 50% yellow fever vaccination coverage. The availability of vaccines has to led to ill-founded complacency about the yellow fever threat. It is a neglected and forgotten disease".


But Executive Director, National Primary Health Care Development Agency (NPHCDA), which is in charge of immunization in Nigeria, Dr. Ado Gana Muhammad, told The Guardian that the country has critical stock to address any outbreaks of yellow fever and measles and there are plans for vaccination campaigns in high-risk states during third quarter of 2016.

Muhammad said: “Efforts are ongoing to sustain the improved national immunization coverage for yellow fever and measles. The country has critical stock to address any reported incidence of outbreaks, no matter how small, through reactive small-scale campaigns.

‘‘Additionally and based on our epidemiology we do conduct follow-up or catch up campaigns. In 2015, we had nationwide measles follow-up campaigns for the 19 northern states in November / December 2015 and for 17 Southern States in February / March 2016. Our national targets were 38.5 million under five-year-old children. At the end, we reached 22.9 million children in the northern states and 19.0 million in the southern cluster of the campaign giving a total of 41.9 million that is 108%.

“Based on the current risk assessment mapping and the recent campaign outcome, Local Government Areas (LGAs) with less than 95% coverage or greater 20% missed children, will be targeted for special patchy campaign to induce additional immunity to avert potential outbreaks.

“Yellow fever campaign is also being planned for the high-risk states during third quarter 2016. There is also active surveillance for the two diseases for early detection and prompt response.”

The NPHCDA boss had told The Guardian that the Federal Government in line with global best practices planned to resuscitate Yaba Yello Fever (YF) vaccine plant using a Public-Private Partnership arrangement. “Since 2005, an MoU was signed between the FMoH and a local pharmaceutical company (May & Baker) that was followed by the signing of a Joint Venture Agreement (JVA) in 2007. This shows how serious the country is committed to the production of YF vaccine both for our domestic use and subsequently for export,” he said.

Yellow fever is transmitted by the same mosquitoes that spread the Zika and dengue viruses, although it is a much more serious disease with death rates as high as 75 percent in severe cases requiring admission in hospital.The condition, which takes its name from the jaundiced color of some patients, has spread to the Democratic Republic of Congo and there is concern it could gain a foothold for the first time in Asia.Yellow fever, which is endemic in parts of South America and Africa, causes at least 60,000 deaths each year. Many people who become infected recover quickly and there are 84,000–170,000 annual infections, more than 90 % of them in Africa, but some develop jaundice, bleed from their orifices and sustain fatal organ damage. Some experts have called for a effective switch in strategy to use just one-tenth of the usual vaccine dose to conserve scarce stocks but the WHO says it cannot be sure this would work (Christina Faust).

A retired virologist who formerly worked for the WHO and the United States Center of Disease Control and Prevention (USCDC), Jack Woodall, in an article in The Lancet medical journal on April 16, said a short-term solution could be to slash the dose, since research suggests just one-tenth can produce the same immune response as a full dose.“We need to get a low-dose vaccine authorized as soon as possible because if we keep using full doses we will never catch up.” Woodall and colleagues laid out the case for the emergency use of a one-tenth dose.

The WHO says cases of yellow fever imported into China, which has close commercial ties with oil-rich Angola, show that “this outbreak constitutes a potential threat for the entire world.”And it is warning that further spread elsewhere in Africa and Asia would increase the squeeze on vaccine supplies and could interrupt routine immunization (Chukwuma Muanya, 2016). 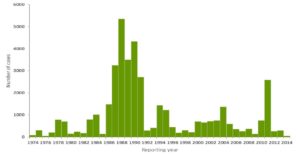 Cases of Yellow Fever. Summary of cases of yellow fever reported to the World Health Organization between 1974 and 2014. . Data from WHO Global Health Observatory Data, figure from ECDC