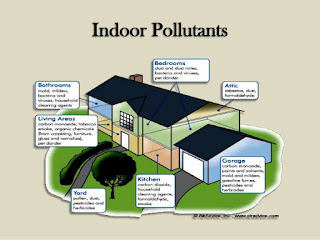 An estimate of 3 billion people cook and heat their homes using solid fuels (such as wood, charcoal, coal, dung, crop wastes etc) on open fires or traditional stoves. Such inefficient cooking and heating practices produce high levels of household (indoor) air pollution which includes a range of health damaging pollutants such as fine particles and carbon monoxide.
In poorly ventilated dwellings, smoke in and around the home can exceed acceptable levels for fine particles 100-fold. Exposure is particularly high among women and young children, who spend the most time near domestic hearth.
According to WHO, 4.3 million people die per year from the exposure to household air pollution.
http://www.who.int/indoorair/en/

Indoor air pollution has become a major public health problem for a large number of the world's poorest, most vulnerable people. It is responsible for ta similar proportion of the global burden of diseases as a risk factor such tobacco and unsafe sex.
Indoor pollution has led to a result of childhood acute lower respiratory infections. According to WHO 2000, exposure to indoor air pollution in developing countries has increased the prevalence rate of acute lower respiratory infections, and tuberculosis.